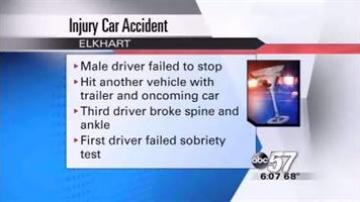 Police say that the driver drove through a stop sign and crashed into another vehicle with a trailer.

That's when they say he hit another car coming in the opposite direction.

That female driver suffered a broken spine and shattered ankle.

Officers say the driver who caused the crash tested positive for alcohol.