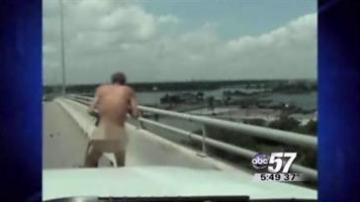 KEMAH, Texas. – Some video was captured on a police dash cam out of Texas of a man getting busted for public nudity.

He was riding his unicycle au naturel.  Joseph Farley was arrested Wednesday on a bridge near Houston.

Believe it or not, investigators say the former teacher was neither drunk nor impaired.

"He said he liked the way it felt,” said Kemah Police Chief Greg Rikard. “I really don't know what he meant by that, but that's what he said."

Farley is charged with indecent exposure.