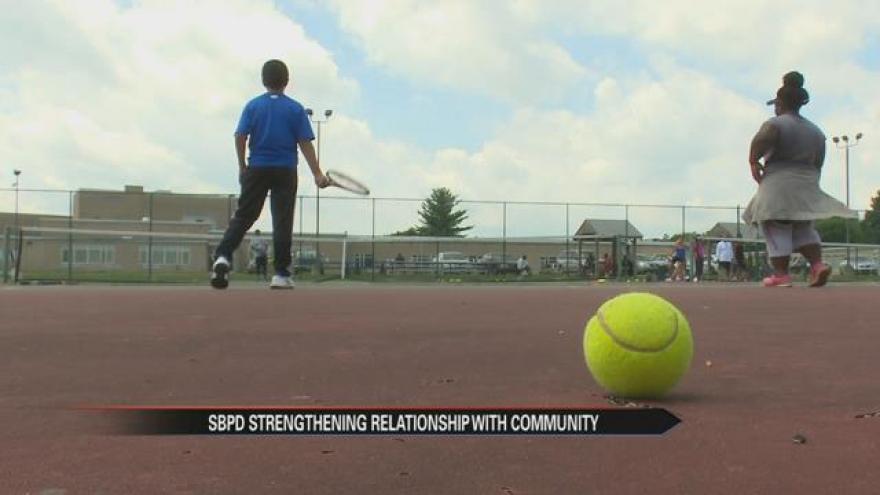 In the midst of all the recent violence, one local organization is working to keep the peace on South Bend streets. The Police Athletic League, or PAL, is using sports to strengthen relationships between police and the communities they serve.

Over the past 21 years, police have mentored thousands of kids through PAL. They teach them about sports, but through that, the kids build a bond.

Tennis is connecting kids to the police in a positive way. And most say they love going.

“It’s cool. You get to learn, like, about a lot of cool stuff,” said first-time camper Olivia Alexander.

It all started with south bend police Captain Darryl Boykins.

“I also wanted them to get used to having law enforcement officers and having that kind of relationship to understand why we’re out here together-to learn how to play and have fun, and we can do that and break down barriers really,” said Darryl Boykins, SBPD Captain and PAL program founder.

Long-time camper Kevin Kirkland says that’s exactly what they do—and that’s why he decided to help run the program after starting as a camper 18 years ago.

“We have everybody from different backgrounds, different nationalities, different ethnicities, and just to say we have this one place that we can call home and that we can grow and live and be peaceful together. That’s all we strive for, and that’s our main goal with this program,” said Kevin.

Many campers agree that it's a haven.

“It feels safe and like you’re really protected, and you know that you’re going to get understanded, because you can always ask them for help,” said first-time camper Christenia Collins.

Captain Boykins likes hearing that, because he admits--it’s tough to be a police officer.

“One day, I will be a hero. One day, I will be the villain, but we all know that when we take the job, and that’s part of what make the men and women of the police department very good at what they do, and hopefully society and the community feels that same way,” said Captain Boykins.

“I want to become a police officer.”

It’s not only tennis that PAL runs. They also have a summer football and swimming program. It runs Monday to Friday until August 5th, and you can sign up anytime.