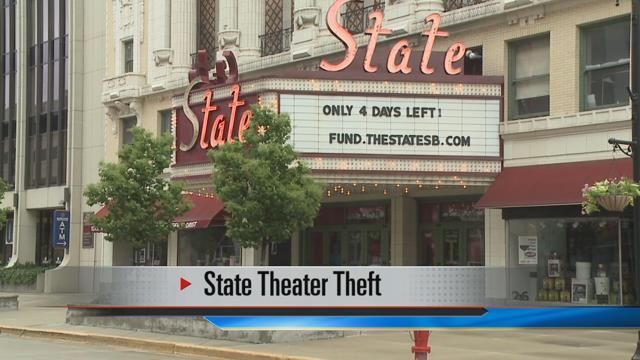 A man accused of using the State Theater as a temporary home and allegedly stealing multiple pieces of expensive equipment was arrested Thursday afternoon.

Jacqui Oberlin, the theater’s property manager, says she’s thrilled police finally caught the man whose been stealing from her theater and sleeping there for weeks.

But on Thursday afternoon, police located 23-year-old Michael Osborne inside the theater. They said he was wearing a stolen backpack with stolen camera equipment and a guitar inside.

When Osborne was escorted by police, they say he tried fleeing but was caught a short distance away.

Oberlin describes knowing something wasn’t right when she noticed food missing from the concession stands.

“My first thought was ‘gee we’ve never taken anything more than a bag at most and always left money behind when they’ve been there for rehearsals. I never put anything away because I trusted everybody and I thought ;no it can’t be them, they wouldn’t do that’, I thought no big deal, this means probably that somebody is in the theater,” said Oberlin.

Oberlin says she thinks that Osborne was living in an empty dressing room. Inside it she found a cot, books, and clothes moved into a drawer.

The manager says neighboring businesses owners say they've seen Osborne climbing on the marquee then sneaking through a window to get inside.

"This is somebody who’s coming in on his own little route which was not a route we suspected," Oberlin said.

According to charging documents, a young woman told police Osborne invited her to the theater calling it "his place".