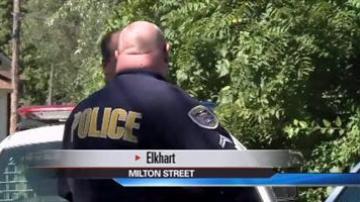 Neighbors along Milton Drive told ABC 57 they say about six cop cars flew by their street. They also say that officers were chasing a man who was driving a car police told them was stolen.

The witnesses say the suspect got out of the car which he parked in an alley behind an abandoned home.

And when we walked between a house and a garage, the suspect look paranoid.

Witnesses told us that police caught the guy a few streets away near the railroad tracks.