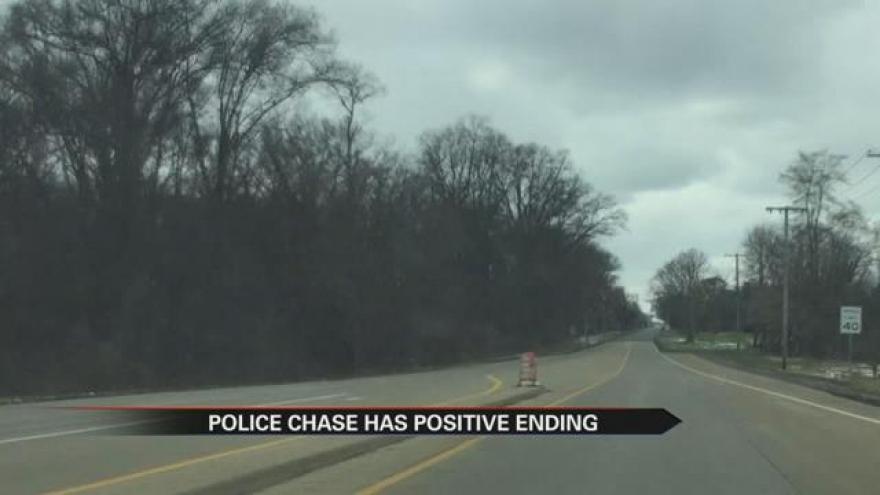 A St. Joseph County police chase was cut short, but the suspect was still identified.

Supervisors say a clever officer was able to track down the driver using more than his squad car.

“A car is coming close to another car, flipping its lights off and on, honking a horn and stuff like that. He sees the vehicle actually come around and start to pass this other car, forcing it partly off the road,” Assistant Chief Bill Thompson said.

The officer began following the vehicle.

For just a moment, the driver stopped and he stuck his head out of the window, looking at the officer.

The suspect then sped off again.

The officer followed the car on wet streets, from Cleveland, to Capital, to Douglas.

“The speeds got higher and as the pursuit got closer to Mishawaka,” Thompson said,

In Mishawaka, at the intersection of Douglas Road and Main Street, the officer stopped his pursuit.

“Our supervisors made what we believe was the direct decision to call it off, so the pursuit was terminated,” Thompson said.

The investigation, however, kept going.

Remembering the face of the driver and license plate of the car, the officer searched through jail and vehicle records.

“He spent some time going through computer files later that night and was able to ultimately identify the driver. Come to find out, the driver had a couple of warrants on him,” Thompson said.

Now, a felony warrant could be added for the suspect, Luis Diaz.

“All the right decisions got made. All the right police work got done. This is the way it’s supposed to work,” Thompson said.

However, Thompson says each police pursuit is different, and decisions are made differently every time.

“There are certainly some times and some conditions where we might chase someone further,” Thompson said.

Diaz has had several other arrests out of St. Joseph County.

Police say they know where he might be, but they’re hoping to avoid another pursuit when they go to arrest him.