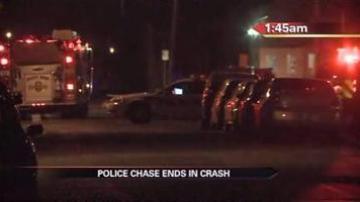 SOUTH BEND, Ind. — A police chase through the streets of South Bend ended with a crash on the city's westside.

According to police, the chase ended when the driver hit a stoplight pole and then crashed into a gas meter next to a building.

Police would not let anyone near that building because of the gas released in the area.

The driver was taken to Memorial Hospital for treatment. He is now being held in the Saint Joseph County Jail.

State police have not said why they were chasing the suspect.