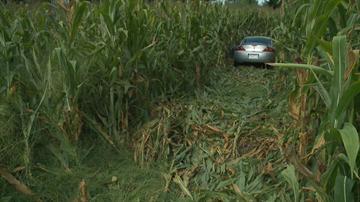 ST. JOSEPH COUNTY, Ind. – Two burglary suspects are in police custody as of Thursday night after a wild chase. Neighborhoods nearby the crime scene are credited with helping officers catch the bad guys.

Michele Gee was outside her home just before 10 a.m. Thursday and she remembers seeing something out of place, "that’s when I saw a strange car go down the road," she said.

About a half an hour later is when she got a call from her neighbor saying he saw two men looking around their other neighbor’s home.

"He saw the car facing on the side of the road between the house that they robbed and his house ," said Gee, "and the two men were out walking, they went up to the house and then around the house."

After a chain of phone calls to the home owners, Gee called the North Liberty Police Department.

A single officer responded to the home in question on the 66000 block of Smilax Road and that’s when the suspects took off.

"We had two male subjects run from the residence jump into a car and at that point my officer called out that he was in a vehicle pursuit," said Town Marshall Michael Sawdon with the North Liberty Police Department.

The chase behind the wheel lasted about ten minutes. That’s when the suspects’ silver car drove into a corn field near the intersection of State Road 23 and New Road. The burglars bailed out of the car and fled on foot.

A helicopter and K-9 units were also called in to help with the search. Before the chopper could get on the scene, two officers found the suspects hiding.

"A couple of officers were able to find them deep in the woods inside of an irrigation ditch, actually sinking in the mud, and were able to capture both of them," said Sheriff Michael Grzegorek with St. Joseph County Police.

The entire chased took about two hours. People near the crime scene told ABC 57 the suspects are actually brothers and are close in age. Police said one is a juvenile and the other is an adult.

Neighbors told us that the suspects got away with jewelry and money from the residence. One neighbor said he saw the suspects leave with a backpack that they appeared to adjusting as if it was heavy.

Two windows were broken out of the house.

It appears that the suspects jumped on an air conditioning unit and entered the house through a back kitchen window.

Police said they did not find weapons on the suspects.

Neighbors said it’s a good lesson in knowing who your neighbors are and looking out for each other.

"It’s good to know your neighbors, have their numbers and be friendly enough that you can call and look out for them which we do in north liberty," said Gee.