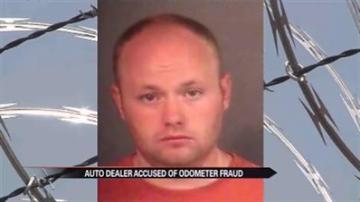 MISHAWAKA, Ind. -- A Mishawaka used car dealer was arrested on two counts of odometer fraud for allegedly rolling back the odometers on cars. Police say he could be at it again, but Adame Scott says he didn't do what he's accused of doing.

"You're buying something you think is name brand, and if you found out it wasn't name brand, you'd be upset," said Detective Regis Thimons of the St. Joseph County Police.

Thimons is investigating this case.

He has fielded dozens of complaints over the last few weeks from people who say they have bought cars with fraudulent odometer readings from Scott.

Detective Thimons says he's gathered information that some of those cars are dangerous.

"If you know it's something that shouldn't be done, then you probably shouldn't do it," said Thimons.

What does Scott have to say?

"All your information is false man," said Scott.

He denied doing anything.

They say that based on what they've seen so far, Scott could be facing more felony charges.

Investigators believe there are still victims out there. If you've purchased a vehicle from Scott's Auto Sales, they want to hear from you. You can contact Detective Regis Thimons at 574-217-5150.