Police department may be investigating complaint against chief 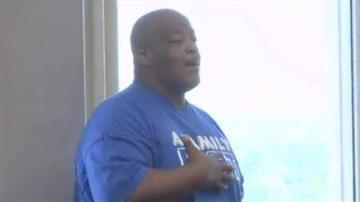 SOUTH BEND, Ind. -- A community activist told the South Bend Board of Public Safety meeting Wednesday that a lieutenant is looking into allegations that the chief of police didn’t come to the aid of an officer who was trying to break up a fight behind the Martin Luther King Jr Rec Center in late April.

Reverend Greg Brown made the initial complaint about the incident and attended the meeting to face the chief.

But the board set a special meeting for Monday to decide how to proceed with the issue.

"I have to come all the way to the [Board Public Safety], get off my job, come and sit down here for two and a half hours, just to talk to him and he still never said anything back, he never replied,” said Brown.

Brown accused Chief Ron Teachman of not coming to the aid of an officer who was attempting to break up an altercation behind the Martin Luther King Jr Rec Center in late April 2013.

Community activist Mario Sims told the board that he has been told by witnesses that Lieutenant Lee Ross, the internal affairs officer with the police department, has already begun conducting an investigation into the matter.

The board said they heard the same thing just that morning and seemed concerned.

But the Board of Public Safety doesn't have any authority to punish Teachman since he was appointed by the mayor.

If there was an investigation into Teachman's actions it would have to be initiated by the mayor, who could have theoretically told Ross to gather facts for him.

We have not been able to confirm whether or not the mayor’s office is investigating the matter or if it has asked Ross to act on its behalf.