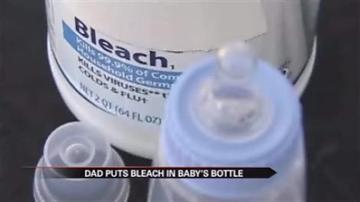 The father said he simply made a stupid but innocent mistake based on some bad parenting advice.

Police said the father of the two-month-old poisoned her after he mixed a cap of bleach with her formula.

The first-time father said he thought he was helping his sick daughter because of breathing problems since birth.

"I was told by another friend of mine that giving a baby a top of bleach, just the top of it would help her breath a little better," said Carron Washington. "It was a dumb decision on me. I heard someone else did it so I wanted to try to help her."

Washington faces a felony charge. And if convicted, he could get up to 10 years in prison and a $10,000 fine.