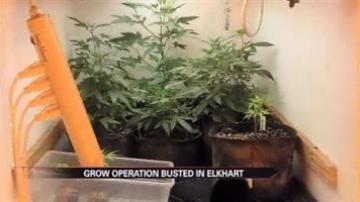 "Police was johnny on the spot. They swarmed. Nobody could go anywhere. They responded so fast," said Gary Baldwin.

Baldwin has lived on the Old U.S. 20 for 15 years and he could not believe his eyes when he saw officers carry out $10,000 worth of marinuana and $5,000 in cash from the house right next door.

"I saw the buds and they were big and real green so they had to be growing them inside," said Baldwin.

"We watched the old man get handcuffed and put in the car," said Maurice Pendley.

Baldwin and his son-in-law, Maurice Pendley, said as crazy as it was to see police swarming the house next door, they knew something was going on, because of people constantly coming and going from the house.

"It was like Wal-Mart, cars coming in then as soon as one pulled out then another one pulled in," said Baldwin.

But these shoppers were looking for more than low prices, they wanted drugs.

Neighbors said most of Benn's customer's were teens.

"I believe he needs to know not to sell drugs to kids and that is exactly what is going on," said Pendley.

Baldwin said he is thrilled police got rid of the pot, because he has kids living under his roof as well.

"I got four grandkids and I don't want them to see what came out of that house yesterday," said Baldwin.

Benn is being charged with three felonies, including possession and cultivating marijuana, as well as maintaining a common nuisance.