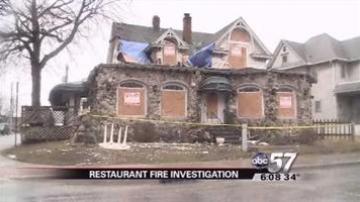 MISHAWAKA, Ind. -- It's official, according to a Mishawaka police report, the fire that destroyed Francesco's Italian Restaurant on Monday was set on purpose.

To clear up the confusion, ABC 57 News got a hold of the police report and found the fire at Francesco’s was more than just suspicious. The crime of arson is listed in the report, along with more details on the investigation.

Half of the window on the door on the east side of the building was broken. According to the first officer on the scene, most of the broken glass fell in onto the floor of the restaurant; which means someone broke into the building before the fire started. The officer then stumbled upon some vomit on the walkway just outside of the entrance which was photographed as evidence.

Officers tried took the stairs behind the restaurant up to the second story of the building to look for people inside but when they got to the door, the smoke was too heavy to go in. No suspects were located and the fire department quickly took over to battle the flames.

On Thursday Shafer was back out at Francesco’s for the fourth day in a row, the Fire Marshal said investigators have a few ideas of how the fire started and now they’re just testing out their theories to figure out what really happened. Shafer could not do an interview or disclose any more information than that, the lead detective on the case told him he was no longer allowed to speak to the media about the investigation; both the fire and the criminal investigation are active.

Forensic investigators were also out on the scene, hired by the company that insures the building to conduct an independent investigation. People in the area said business at Francesco’s had slowed in recent years and some have questioned the owner’s involvement.

Francesco Catanzarite of Mishawaka, better known as Frank opened the restaurant almost 30 years ago. The business was family owned and operated; the Catanzarites took ownership of the property just last year. Frank’s son told ABC 57 News on Monday that the entire family is just devastated, now a part-owner he said all of his brothers and sisters grew up at that restaurant. The owner’s son said the family suspected arson but they have no idea who or why.