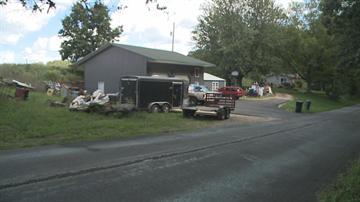 On Monday, four men were charged in connection with having 23 pounds of crystal meth in Van Buren County. According to a release from U.S. Attorney Patrick Miles in Grand Rapids, the street value of methamphetamine was more than $500,000.

“It’s really commonplace,” said Rick Brown, a Lawton area grape farmer Monday. Brown lives less than a mile from one of the locations where meth was seized and was unimpressed by such a large bust. “It’s in the neighborhood,” he said. “It’s common.”

Brown said meth is so common in Van Buren County, he and his neighbor have found meth lab trash on their farms several times. “We found six or seven meth labs,” he said. “I had four on my farm alone.”

The U.S. Department of Homeland Security along with the Metropolitan Enforcement team conducted several undercover purchases of crystal meth from the suspects and made plans to purchase 20 pounds of the drug, leading to the arrest.

Officers found 18 pounds of the crystal meth in a hidden compartment of a car and five more pounds inside Streich’s Lawton home. Miles said it is the largest crystal methamphetamine bust in West Michigan’s history and possibly state history.

“It’s more prevalent than you’d think,” said Jason Bull, another Van Buren County man unimpressed by the magnitude of the bust. Bull is an unlikely warrior against meth use in the county, he’s the pastor of Freshwater Community Church in Paw Paw.

Freshwater Community Church started a program two years ago to fix Van Buren County’s reputation as the meth capitol of Michigan. They fundraise for meth rehab programs. Bull said nearly all of his 500 parishioners know someone affected by meth use. “So to hear that ‘oh there’s the biggest meth bust in Lawton’ unfortunately it’s not surprising,” said Bull. “There’s just so much out there.”

According to data from the Michigan State Police, in 2010 the most recent data available, Van Buren County had the second most meth busts in Michigan, despite being one of the least populous counties.

Brown said he isn’t surprised by the magnitude of the bust but is still concerned. “We’ve all got kids and grandkids, we don’t want them to get hooked on it, it’s very addictive and you can’t get off of it,” he said.

All four suspects are in the custody of U.S. Marshalls and if convicted face between 10 years and life in prison.