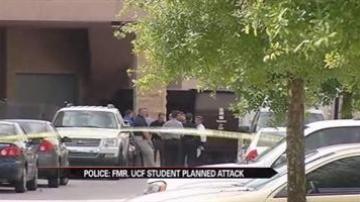 ORLANDO, Fla. —  A former student found dead in a University of Central Florida dorm had been planning an attack, according to campus police.

Police said that the 30-year-old student pulled the fire alarm to possibly draw people out into the open at the UCF campus on Sunday.

According to police, he then went back to his room where he pulled a gun on his roommate.  The roommate ran into a bathroom and called 9-1-1.

When police arrived, they found the gunman dead.

Officers said they found a handgun, an assault weapon rifle, hundreds of rounds of ammunition and a backpack with homemade bombs.

"We found some notes, some writings that indicated that this was a planned attack,"  said UCF Police Chief Richard Beary. "This individual laid out a time line and laid out some of what we feel were going to be his actions."

Police said the student acted on his own. His only other encounter with police was a traffic violation.