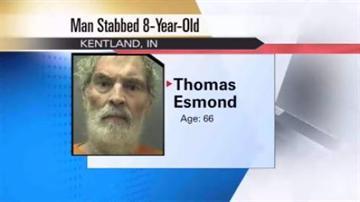 When police arrived on scene, they were confronted by Thomas Esmond who tried to attack the officers but he was soon subdued by a taser gun.

The boy was taken to the hospital in stable condition.

Detectives said the motive behind the stabbing remained under investigation.

Esmond remains in jail without bond.