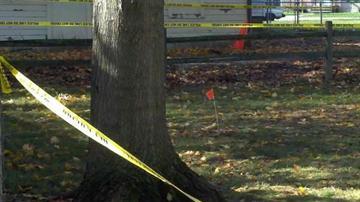 LA PORTE, Ind. – A man was found shot to death outside his home late Sunday night, within sight of the La Porte Police Department.  Police received a call that someone had been shot on the 1100-block of Indiana Avenue at 9:49 p.m. and found the body of James R. Greve, 46, in the backyard of his apartment home.  Witnesses said someone shot Greve two times and then fled the scene.

“He was standing in the middle of the alley, facing Indiana (Avenue) and BOOM, BOOM and I saw the flash of the gun,” described Tina Kellar, who lives nearby and saw the shooter.

Kellar explained that she saw Greve’s truck pull up to its normal parking spot while walking her dogs and saw the passenger door open.  When she looked back towards the truck she saw the shooter holding a shotgun and standing in the alley behind Greve’s home.  However, she couldn’t see the suspect well enough to give a good description.  When she heard the shots she ran back inside her home.

“I couldn’t believe what I was seeing, I was afraid,” she explained.  “All I could think to do was just get my dogs and get in the house.”

Her husband met her inside and said he heard people shouting “call 911” and “I think he’s dead.”  Kellar’s next door neighbor, Toni Legner, heard the shots.

“I heard BANG and then probably three seconds later I heard the second BANG and I thought it was fireworks,” Legner described.  “Right here, outside my bedroom window he’s dead while I’m lying there thinking it’s fireworks he’s dead!”

La Porte Police arrived on scene quickly; police headquarters is right across the street.  In a press release, police explained that several witnesses saw the suspect fleeing the scene.  Police also believe that the murder wasn’t random, that Greve was targeted.  Neither Tina Kellar nor Toni Legner knew Greve well.

“I’ve asked this guy several times to slow down coming through the alley, he was a pretty wild kind of guy,” Legner described Greve.  “I didn’t know him personally.”

Tina Kellar didn’t even know she had witnessed a murder until she was taken to the police station to be interviewed by detectives.

Kellar has lived in her home nearby for almost 8-years, Legner for 25-years.  Neither expected to have a murder scene outside their homes, but recent activity at Greve’s apartment home had them worried.

“We’ve seen a lot of shady activity that makes me wonder what was going on last night,” Legner explained.  “I hate it, I hate it.  I love my home; I’ve always felt safe here.  The police station’s right across the street.  But, I don’t, I don’t anymore.”

Legner explained that the home where Greve lived has been turned into multiple apartments and she worries about who lives there.  Legner claims she’s found drug paraphernalia in her yard.

“In a way I do blame some of these landlords that come in and buy up these distressed homes.  Don’t do much to them, just enough to rent them back out, chop them up, make them into apartments,” she explained.  “They don’t care who is living here.”

Both women are hoping the crime scene tape, and the small orange flag marking where Greve’s body was found are taken down quickly.  So they can try to get back to living.

“It’s going to be hard for me to deal with the fact that violence happened so close to my home and that I saw it,” Tina Kellar explained.  “It’s not an easy thing to deal with.”

“It’s just sad, it makes me now think that maybe I should put my house up for sale,” Legner explained.  “I hate it, I hate it.”

La Porte City Police aren’t releasing many details due to the ongoing investigation.  But, detectives did tell witnesses that they the suspect was possibly wearing a Halloween mask.  A witness was also told that police are looking for a blonde woman who was seen crying over Greve’s body, but was gone when police arrived.