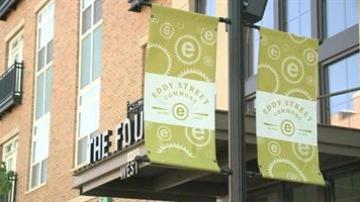 Police say a large amount drugs were found inside an apartment on Eddy Street Tuesday night.

They said they are in the process of making contact with those associated with the unit.

“That’s shocking. It’s really shocking to hear that,” said Remus Webb who lives in the neighborhood.

Police said staff at The Foundry were cleaning what they thought to be a vacant apartment when they noticed a room full of drugs and immediately called police.

“We found everything from mushrooms, to a large quantity of marijuana, to methamphetamine,” said South Bend Police Captain Phil Trent.

They said with the large amount of drugs inside the apartment, coupled with the variety, those involved had every intention to deal.

“There was equipment to package it, to weigh it, to manufacture methamphetamine, so it was quite an operation being conducted out of that apartment,” Trent said.

Investigators from the city’s narcotics unit are in contact with three people associated with that apartment, who they believe are not from the area.

Police could not say whether they are students.

It is an uncomfortable situation for those who live there.

“I’m very surprised. Especially with it being such a nice area I wouldn’t think that a drug grocery store like that would be located in one of these Foundry apartments over here,” said Foundry resident Ruben Normen.

“It’s disconcerting that there was a drug operation going on so close to campus and to that shopping area,” Trent said.

We asked representatives with The Foundry to talk about this investigation, but they said there was nothing to say about it.