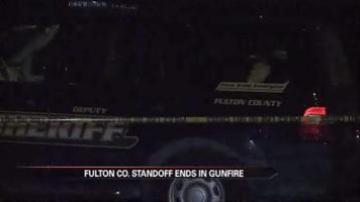 Police rushed to 307 West Brown Street for a domestic violence call after they heard shots were fired. They say say multiple departments including the SWAT team responded and surrounded the house.

But they could not get the alleged shooter Nicholas Westernoff to come outside.

After trying to negotiate with him, they heard Westernoff fire a gun inside the home.

He then came out the front door and started toward police officers and fire was returned.

Sergeant Riley says one of those bullets likely hit him because he dropped to the ground.

Medics rushed in and Westernoff was flown to a hospital in Fort Wayne.

"Basically, he would never talk to us on the phone. He did talk to family members and I think the sheriff but nothing helped eliminate the problem," said Riley.

Police say the woman inside the home is safe and left the house shortly before the shoot out started.

They say Westernoff fired at them and cars in the nearby area.