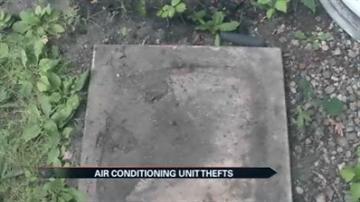 She had to go outside to try to cool off, even though the outside temps were in the mid 80s.

"Usually I kept it at about 73-degrees,” said Kaczmarek.

On Sunday morning when she woke up, her house was boiling and so was she after she looked out the window.

"I was just shocked. I was just very shocked because I looked out and I expected to see an air conditioner and here it was just a piece of cement laying there," said Kaczmarek. "I didn't even realize they would steal a central air conditioner because it's so heavy."

An air conditioning unit was stolen from a home on N. Adams Street as well. The homeowner noticed it was missing Monday.

Police say they thieves are probably after the copper inside which they can resell for scrap.

"I've lived here since 1974 and it was a beautiful street everything was kept up all of the lawns were manicured and now it's very, very terrible. It's like ghetto,” said Kaczmarek.

She says even the vacant houses across the street have been stripped for the aluminum siding. She says they’re bold and do it in the middle of the day.

Now she's meeting with contractors, trying to stop the thieves from targeting her again.

"I'm going to have a chain link fence built around the air conditioner with the lock and I'm hoping that that will discourage the thieves,” said Kaczmarek.