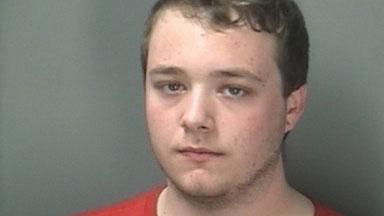 (CNN) -- An Indiana University student was arrested over the weekend after police say he attacked a Muslim woman, yelling racially charged comments at her and trying to remove her headscarf.

Police on Monday did not identify the woman, but said that she had been dining in a Bloomington, Indiana, restaurant's outdoor seating area Saturday night with her 9-year-old daughter when she was approached by 19-year-old Triceten Bickford. Police said the woman claimed Bickford was yelling things like "white power," "kill the police" and derogatory statements about black people.

Police said Bickford squeezed her neck and began forcing her head down toward a table, and tried to remove the scarf covering her head.

The woman's husband and a passerby helped restrain Bickford until police arrived. The woman complained of pain in her neck but didn't require medical condition, according to CNN affiliate WTHR.

Bickford was charged with intimidation, public intoxication, two counts of misdemeanor battery, one count of felony-level battery, strangulation and illegal consumption of alcohol by a minor. CNN affiliate WTTV reported that Bickford's blood alcohol content was 0.195.

He was released on bond from Monroe County Jail on Sunday and paid about $705 for his release, according to the jail.

In an interview with WTHR, Bickford apologized to the woman.

"I'm so sorry to that woman," he said. "I have no idea who she is, but words can't explain how much that ... I've never hurt someone like that before."

Bickford said he had no memory of the incident, had been drinking heavily at the time and didn't take his anti-anxiety medication that day.

"It is the idea of respectfulness of the self; removing that is like forcibly removing one's dignity," Shaikh said.

The Council on American-Islamic Relations has called for prosecutors to bring bias charges against Bickford. A spokesman for Bloomington Police said that Indiana had specific laws on hate crimes, so those charges would need to be pursued at the federal level.

The FBI's office in Indianapolis started a probe into the incident on Monday to see if a hate crime occurred, WTHR reported.

"We are concerned that the low bail in this case is an indication that it is not being taken as seriously as it should given the allegations of violence and the alleged bias motive," said CAIR spokesman Ibrahim Hooper.

"This type of abhorrent behavior is not representative of our students, nor of the culture of inclusion and tolerance so many people at the university and in the Bloomington community have worked so hard to foster," the post read.

In its post, Indiana University said it would closely monitor Bloomington Police's investigation, as well as conduct an investigation of its own.