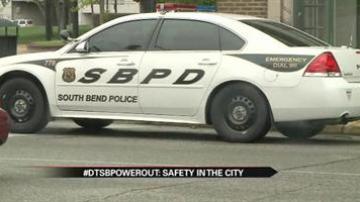 SOUTH BEND, Ind. -- Captain Phil Trent with the South Bend Police Department said officers are not as worried about crime this weekend as they are about traffic accidents. A fire caused a large power outage in downtown South Bend.

The city has put up free-standing lights at many corners throughout downtown South Bend.

Traffic lights are not working so people are having to revert to four way stops.

Captain Trent also says this is dangerous for people walking downtown but it could also throw off even the most experienced of drivers.

“Downtown as we know has a lot of one way streets," said Trent. "The lighting is bad, and when the streetlights aren’t working, people get disoriented even if they’re life-long South Bend residents. They could be going down the street and it just won’t look that familiar to you. Because some of those visual cues won’t be there and so we’re worried about people blundering the wrong way on one way streets.”

Surprisingly many residents aren't put off by the outage, they're actually being supportive.

“It definitely is kind of a little creepy out here but I wanted to come down and support the local businesses that have paid for generators to stay open to help support the community," said Whitney Nickle of South Bend.