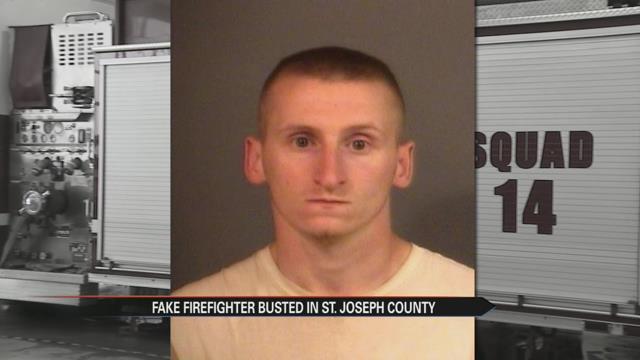 Police say a man who was impersonating a firefighter was arrested for a burglary in New Carlisle.

This could either be a coincidence or a connection that links 25-year-old suspect Franklin Powell to a burglary at a volunteer fire station.

“It’s not every day that we get a situation where somebody tries to impersonate a public servant," said Lt. Matthew Blank, St. Joseph County Police.

It was a bold lie that helped land Powell behind bars.

“He insisted that he was with a local fire department however I checked with most of the area fire departments and turned up no evidence whatsoever that he belonged to any one of them, they all denied knowing the guy,” said Lt. Blank.

Powell was pulled over after his vehicle was caught by a camera at SMS Scrap Metal Services after hours.

Police say he forced his way into the business’s office with intent to steal while wearing firefighting equipment.

“The suspect that was located inside that vehicle was wearing some type of firefighter’s equipment,” Lt. Blank.

That firefighter’s equipment may be the same equipment that went missing from Coolsprings Township Fire Department.

Police are investigating the theft of $14,000 worth of equipment from the volunteer fire department.

Now, both departments are working together to see if there’s a connection.

“The investigation is ongoing,” said Lt. Blank. “They’re trying to determine exactly what his involvement was.”

But officials say Powell’s arrest also serves as a lesson to Michiana about phony officials.

“If they have any doubt whatsoever especially when it comes to a public servant like a firefighter of police officer, they should proceed to a public place and some place where there’s lots of people around,” said Lt. Blank.