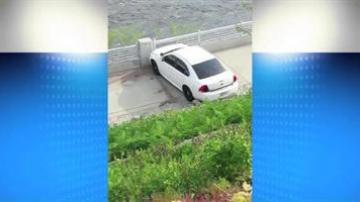 MISHAWAKA, Ind. -- How did a police car go from being parked at a 7-Eleven to crashing into a railing at the Mishawaka Riverwalk? Mishawaka Police say it was likely due to mechanical failure.

"We just got that car back from getting it fixed, so my guess is there is some type of mechanical failure," said Police Chief Kenneth Witkowski, Jr.

The car rolled across the grass behind the 7-Eleven, crossed a street, went through the park and eventually down the hill.

The railing was the only thing standing between the car and the St. Joseph River.

"I don't see how the car would have moved forward unless somebody put it in gear. There is no hill for it to roll down to go across the street up there until it gets across the street to the hill coming down," said Debbie Panagopoulos.

"Until I get some facts and real figures back  and we do interviews with people who were eyewitnesses at the scene, not just people who are reading Facebook, then we will have answers for you," said Witkowski.

Is Witkowski planning to inspect all of their vehicles?

"Just like anything mechanical you see it in the papers, GM has had problems with vehicles shutting off and stuff like that so I am sure we will look at everything and see if this is something that happens to certain vehicles," said Witkowski.

Panagopoulos says she is glad no one was hurt.

She says she hopes Mishawaka Police have learned a valuable lesson.

"Maybe that was a wakeup call. Maybe they will pay more attention when they leave their cars unattended," said Panagopoulos.

We tried to get the 7-Eleven surveillance video but they said it would not be available until the investigation is complete.