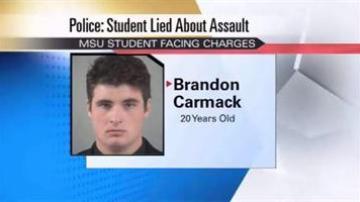 Police say he lied about getting beat up by the hockey team. Brandon Carmack was arraigned in court Wednesday.

Last month the 20-year-old claimed 15 players roughed him up, but investigators said he was in the wrong.

He'll be back in court next month.