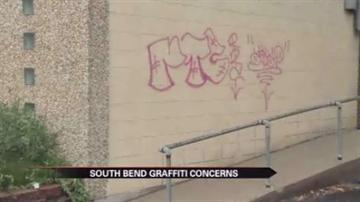 Graffiti has appeared under bridges, on billboards, on doors, and even on churches all over downtown south bend.

One store owner said he believes the graffiti taggers are kids maybe as many as 8 of them.

He didn't want to talk on camera because he is worried he may have more trouble if he does.

South Bend Police are reluctant to call this gang activity.

"A gang would suggest that these people are marking turf and they're really not marking a commercial building as turf. When we see a flurry of activity like this we are looking at a person or several individuals who get at a competition with each other to see how much and how well they exist,” said Captain Phil Trent of the South Bend Police Department. "It's one of those destructive hobbies that will continue until they get caught"