Police officer charged with theft at Walmart now in jail

SOUTH BEND, Ind. -- A South Bend Police officer who was placed on unpaid leave after the prosecutor's office filed charges against him for allegedly switching price tags at Walmart - is now in the St. Joseph County jail.

Brandon Jones has been charged with theft, a class A misdemeanor, and delivery of a false sales document, a level 6 felony.

On September 25, a loss prevention officer at the Walmart on Ireland Road in South Bend watched on video as Jones scanned several items at the self-checkout lanes.

An item of Notre Dame apparel rang up as 'pie pumpkin' for $2.98, reports said.

The loss prevention officer then watched as Jones scanned items including mixed fruit, an air freshener and a container of raspberries. All rang up as either "pie pumpkin" or "mini-pumpkin," according to the probable cause affidavit.

While he was continuing his transaction, the assets protection officer reviewed video of Jones in the store.

She said the video showed Jones picking up pumpkins, walking to his shopping car, doing something to the pumpkins, then returning the pumpkins to the display, according to reports.

While inside the office, the assets protection officer created two receipts, one showing the total amount Jones rang up and the other showed the total amount of all items with their actual price. The difference between the two receipts was a loss of approximately $66, according to the probable cause affidavit.

Jones identified himself as a South Bend Police officer and asked for the incident to remain confidential, reports said.

An officer arrived and spoke with Jones. Jones claimed the incident was "a little misunderstanding." He said when he picked up the items they already had their price tags switched, reports said.

The responding officer watched Walmart's footage of Jones in the produce department taking the pumpkins to his cart and returning them to the display, reports said.

After the charges were filed, an arrest warrant was issued for Jones.

He turned himself in Thursday morning and was booked into the St. Joseph County Jail where he will be held until his bond hearing.

South Bend Police Chief Scott Ruszkowski requested the Indiana State Police investigate a South Bend officer after he was stopped for an incident that took place in a retail store on September 25, 2018.

With these charges announced by the St. Joseph County Prosecutor's Office, the Board of Public Safety has placed Officer Brandon Jones on unpaid leave pending the outcome of criminal proceedings and an internal investigation.

There will be no further comment as this remains an active case and investigation. 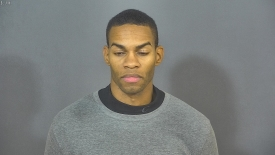