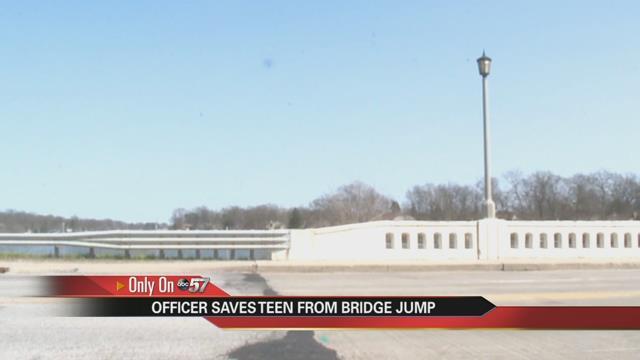 A Penn High School student is safe Thursday, after an officer saved him from a suicide attempt.

“Instinct kicks in. You can’t be trained for that. That’s an instinct,” Corporal Donald Reppert said.

Thanks to St. Joseph County Corporal Reppert’s instincts, the student is safe.

It started around 11:00 Wednesday morning, when a special needs student ran out of his classroom, and out of the building.

Reppert, who was helping out at the school at the time, followed the student down Bittersweet Road, and found him on the bridge.

“When I got there, I noticed that the student was on the cement barrier facing the river, and had both of his feet dangling over the river. He was crying, he was screaming. He was upset,” Reppert said.

A nearby security officer and a middle school teacher arrived to talk to the student as well, but he had his mind made up.

Reppert says he tried to calm him down, but when the student lunged forward toward the river, the officer had to act fast.

“I was able to get my arms around behind him. Kind of bear hug him, pull him back on top of me onto the sidewalk,” Reppert said.

The student was taken to a nearby hospital.

His parents couldn’t be more grateful to Reppert for his quick thinking.

While the officer doesn’t know what made the student upset, he’s got a message for anyone out there considering suicide.

A representative from Penn High School stated the school could not comment on the student matter.