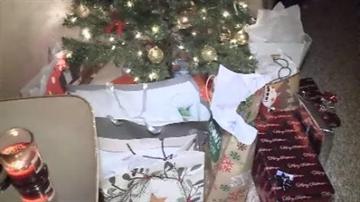 Every year members of the Fraternal Order of Police in South Bend spread a little bit of Santa's holiday cheer, giving presents to kids who wouldn't otherwise have Christmas!

For some kids Christmas came early this year.

Every year South Bend police officers like Nick McKinley volunteer to be one of Santa's helpers, delivering gifts to families who wouldn't otherwise have presents to unwrap on Christmas day.

This year Jordan Evins and his sisters hope Santa brings them something extra special.

The FOP said it wouldn't be possible to make the kids' Christmas wishes come true without the community's generous donations.

But it's just as special for the officers as it is the kids.

"That's the whole reason I do it. That's the best part of this, to see the little kids expressions on their faces knowing they are going to have Christmas this year," said McKinley.

"I am really thankful for the police officers that brought us presents," said Julia Evins.

"I think just providing for these kids gives them the sense that people care about them and that the police actually care about them," said McKinley. "It's a good interaction between the kids and the law enforcement community."

Although the kids can't wait to open their presents, they say that's not the only reason why they look forward to Christmas each year.

"I like to spend time with my family," said Janiyah Evins.

"We like to go outside and throw snowballs," said Jordan.

The FOP does this every year and they rely on community donations to make it happen. And this year they were able to help dozens of kids and give their parents a little relief during the holidays.