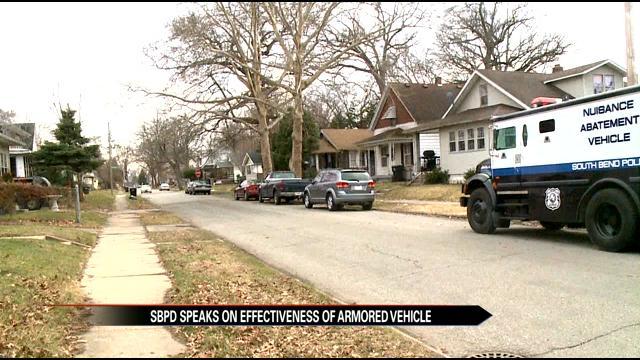 The South Bend Police Department is using a unique tool, called the Armadillo, to cut back on crime in the city.  The Armadillo is a nuisance abatement vehicle, built out of an old Brinks security armored truck, and it's filled with surveillance cameras.  And officials are speaking out about the vehicle's effectiveness so far.

The vehicle has been on city streets since November, but it's been out more consistently only in the last couple weeks.

"We think it's working very well," says Captain Phil Trent, with the South Bend Police Department.  "What we're seeing is we're installing it for 3-5 days, and we're seeing a direct correlation in reduction of any sort of problems."

"It's large, it's in your face, and it's abundantly clear what it is, we're not trying to be sneaky, it's the opposite," says Captain Trent.

Officials want to remind residents that they still need your support.  If you see something, say something.  Even though the vehicle has surveillance, they are not automatically alerted if something happens.
Share this article: