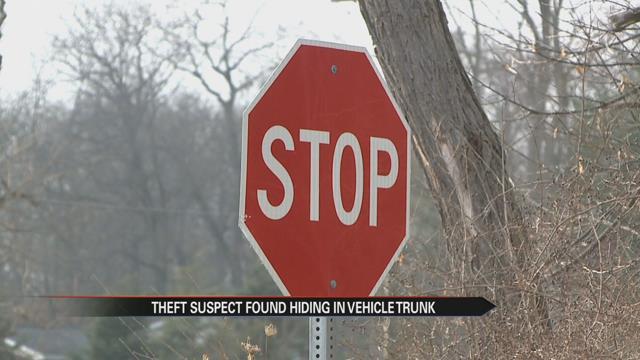 St. Joseph County Police found much more than they had originally expected after pulling a woman over.

While inspecting the vehicle for impound, officers found a man hiding in the trunk.

It all began when South Bend Police tried to pull over a different vehicle, suspected of stealing liquor from the Meijer on Portage Avenue.

South Bend called on St. Joseph County officers to keep an eye out.

“All the other police agencies or adjoining agencies are all sort of on a bit of a higher state of awareness,” Thompson said.

Being aware led county police to stop a car about 30 minutes later.

They got a call saying something about it was suspicious.

“It didn’t match the description of the suspect vehicle,” Thompson said.

Officers pulled it over at the intersection of Auten and Laurel Roads.

“There turned out to be a registration problem with that vehicle, so we were going to impound it,” Thompson said.

False plates weren’t the only thing they found.

When police order a vehicle impounded, they always check around the car for valuables.

When they checked the trunk they found a man hiding.

It was one of the original suspects, Isaiah Seward, 23, of South Bend.

“Certainly the officers were a little surprised when they saw him, but they took all the right safety precautions, and we were glad to be in a position to help,” Thompson said.

South Bend Police eventually showed up and arrested the driver, Jacqueline Lattimore, for assisting a criminal, and Seward, for resisting law enforcement.

“We would have checked out anyway, but it ended up being one apparently connected with South Bend’s chase,” Thompson said.

It was a connection that turned a traffic stop into a one stop shop.

“It is a nice little bit of cooperative venture when we can end up helping out a little bit and help another agency find someone they were looking for,” Thompson said.

The last suspect is still at large.