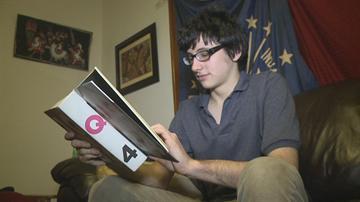 SOUTH BEND, Ind. -- Police said a store involved in a major raid is strategically positioned on South Bend's Northeast side, near homes and apartments where hundreds of college students live.

Investigators said both stores had been selling stolen and fake merchandise, along with synthetic marijuana. During the raid, police seized over 2,000 items between both stores.
Police loaded up boxes with items like fake Uggs, fake Nikes, and stolen property from the Philips 66 gas station off of Ironwood Drive and Ewing Avenue, as well as the Howard Street Food Mart on Howard Street.
Police said Notre Dame students are valuable targets for supplying hot items sold at stores like those involved in Tuesday's raid.
That is because many of the homes in the area are rented out to students each year. For thieves, it's like hitting the jackpot, because they know students room together and with have several valuable items, like laptops and televisions, all in one place.
Patrick Guibert and his roommate were at their house off of Corby Street, hanging out with a group friends, when suddenly the unexpected happened.
"Two men came up, they were seeking around the houses nearby and they pulled out a gun. One of them pulled out a gun and told the girls not to make a sound and to run inside," says Guibert.
The men followed the girls inside, pistol whipping his roommate before demanding that everyone in the room empty their pockets and hand over their wallets. Before leaving, the men snatched up both Guibert and his roommates' laptops.
"It was pretty terrible and it was scary for the next couple of days just hanging out on the porch, having to look over our shoulders all the time".
Guibert says losing his laptop, and the irreplaceable things on it, was just as hard to deal with as the robbery itself.
"I had the beginnings of a novel on my computer, and notes I had been making for a year and a half, so yeah, it was rough. It really threw my everyday life off."
The stolen items recovered by police are now giving students, like Guibert, hope that they may see some of their belongs again afterall.
Share this article: