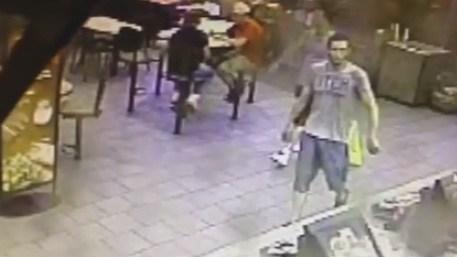 Goshen Police are searching for two men who allegedly robbed a man and beat him outside the McDonald's on Elkhart Road on August 18.

The victim told police he was in the outside dining area when two white men assaulted him and took his wallet and cell phone.

One man was tall and lean and the other was short with a stocky build.

The shorter man was wearing a tank top and had sleeve tattoos on both arms.

The surveillance photos are from the McDonald's.

The third image is the vehicle the two suspects drove away, according to police.

The vehicle appears to be a black or dark colored Toyota Corolla, police said.

If you have any information in this crime, contact the Goshen Police Department at 574-533-8661.