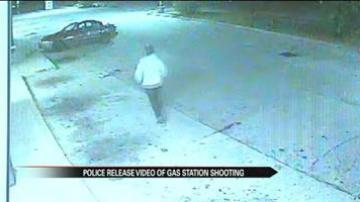 INDIANAPOLIS -- A gas station clerk was critically injured in Indianapolis after he was shot during a robbery.

It happened around 10 Wednesday night.

Surveillance video just released shows the suspect skipping away from the scene.

Police say the man walked into the gas station demanded money and shot one of the clerks several times.

They say he did not give the clerk time to open the cash drawer before he started shooting.

"It's really unthinkable. A guy simply at work doing his job, obviously from the video didn't put any resistance, is shot. So that's why we want the community to come forward with information that can help us identify this suspect. Cause we need to get this guy off the street immediately," said Indianapolis Metro Police Sergeant Kendale Adams.

The clerks were nearing the end of the shift when the robbery happened.

Detectives say the clerk shot had worked there for a while and customers knew him well.