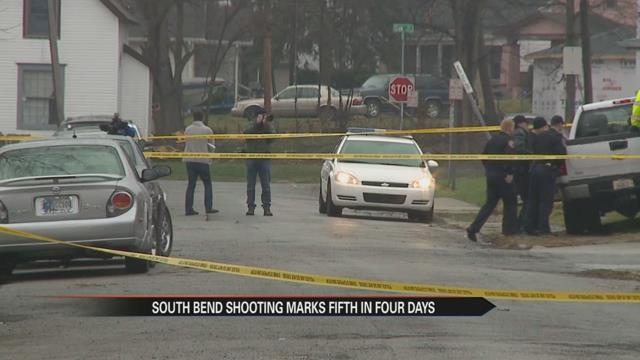 One person was shot Saturday afternoon on the 500 block of Allen Street in South Bend – the city’s fifth shooting in the last four days.

“Officers arrived to the scene, found a male with a single gunshot wound to the chest,” South Bend Police Lt. Dominic Zultanski said. “The male, right now, is at Memorial Hospital being treated. So far, we understand he’s in stable condition.”

Zultanski said it seemed the people involved in the shooting were possibly “in some type of verbal argument prior to the shooting.”

“We do not have anyone in custody,” Zultanski said, Saturday evening.

But he said police were interviewing a number of witnesses.

“With the nice weather and everyone outside, there’s quite a few people that had seen or heard the incident,” Zultanski said. “And that’s why they’re being interviewed.”

The shooting is the fifth to happen in South Bend in the last four days.

The first happened Wednesday night at the intersection of Illinois and Washington Streets.

On Christmas Eve, a shooting happened at the 2400 block of Arrowhead Circle, and a deadly shooting occurred at the 3600 block of Miami Street.

Then on Christmas morning, there was a shooting at the 1000 block of Bryan Street.

And now, this shooting at the 500 block of Allen Street.

“All those [shootings] are being investigated and at this time, right now, we have found no links between the shootings within the past 48 hours,” Zultanski said.

Police spent Saturday afternoon collecting evidence at the scene, including looking in a white pickup truck that neighbors’ said the victim tried to drive after being shot.

No descriptions or names of the people involved have been released.

“Right now, we have a possibility of one suspect,” Zultanski said.

A number of neighbors said they did not feel comfortable speaking on camera because of the amount of violence that occurs near their homes, but they spoke of gunshots often being fired nearby.

One neighbor, who said she is a property manager for more than two dozen homes on and around Allen Street, said the area has a lot of gun and drug problems.