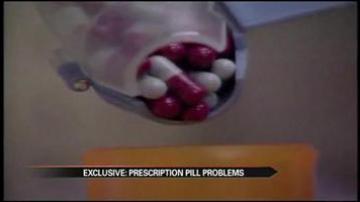 How big of a problem is this among teens in Michiana?

According to the police report, a couple of officers were at 7-Eleven when they spotted two teens allegedly making a drug deal at the park across the street.

The teens were allegedly selling Adderall.

“Honestly I was a little shocked, but that is the way we act in today’s society,” said Kevin Mason.

“It is scary that it is happening in our communities, but it is,” said Wendy Parmley.

Mishawaka Police Lieutenant Tim Williams, who also heads up the D.A.R.E. program, says he can't give exact numbers about how common prescription drug use is among local teens, but he does see it regularly.

“They are taking the drugs like Xanax and Adderall and Ritalin and Vicodin and they are taking it to school and that is one of the hardest things to do is for us to catch them dealing prescription drugs,” said Lt. Williams.

“Prescription drugs are always accessible because if you have someone that has to take them, they are in the medicine cabinet,” said Lt. Williams.

Though these drugs are technically legal, Dr. Teters says they can have adverse side effects and can even be fatal, especially in teens.

“Drugs do not always react the same with children as they do with adults, especially in things like Adderall that are stimulants. They can increase your heart rate and your blood pressure,” said Dr. Teters.

Doctors and police say the best way to protect your kids is to always lock up your prescriptions and make sure to properly dispose of expired prescriptions.

Police and parents agree the best way to make sure your kids do not get wrapped up in prescription pills is to talk to them.

“Talk to them about it,” said Lt. Williams.

“It is important to talk to your kids about everything because if you are not, someone else is,” said Wendy Parmley.

The teen who was selling the Adderall at the park was taken to the Juvenile Justice Center and charged with dealing narcotics.