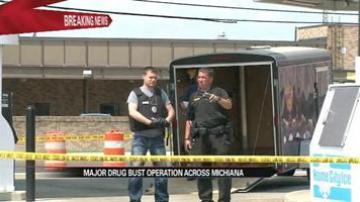 The search warrants are the result of a year-long investigation into the distribution of synthetic drugs in the county.

At Eddy Street Food Mart, police took out several boxes, a safe and a store employee in handcuffs. Police have not revealed what was seized from the store.

At Rick's on Main Street in Mishawaka, officials say they received numerous complaints about the business and the owner.

Some working at nearby businesses said the owner put up a fight when police showed up on scene.

Police said once the investigation is complete, there is nothing to stop the stores from reopening.

The convenience stores in Elkhart being investigated include the Phillips 66 at Thomas and Indiana and the Marathon at Indiana and Franklin.

In November 2013, Daryl Bjoraas went undercover into some of these same convenience stores and purchased synthetic marijuana.

At Rick's in Mishawaka, when confronted, the store owner promised to talk with his business partner about no longer selling synthetic marijuana.

After our story aired, the prosecutor's office contacted us promising to take action.