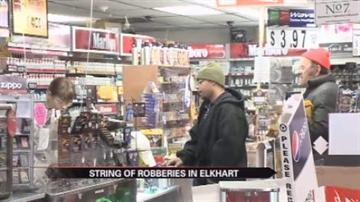 ELKHART, Ind.- Police are still reviewing the surveillance video showing two white males and one white female. One male was wearing jeans and a camo style hoodie. The other, a red jacket with "Indiana" across the chest in white letters. The white female is described as wearing a dark parka with a fur-lined hood.

The two white males first entered the Elkhart Cigarette Outlet along SR 19 and shoved a woman -- who was the only worker in the store-- to the ground.

"Some guys had rushed her around the corner and shoved her towards the back room and they had what sounded like a taser," said Judy Ward, employee.

Ward had just left the store an hour before the incident. The suspects entered the store at 2:15 p.m. demanding money from the cashier. They also took cartons of cigarettes, pipes and other items.

"There was just stuff scattered all over the place, the floor, everything. It was just that they went out of their way to knock stuff over purposefully," said Ward.

Once returning to the store, Ward stayed until police left the scene a few hours later. But when she was leaving the parking lot, she saw a suspicious female coming from the back of the building. Later-- she found out Low Bob's was also robbed.

"Low Bob's was given the description and Julie pulled up the picures on our security camera and it was the girl we saw coming around the corner. She had a big parka on."

Low Bob's is conveniently only a few feet down from the Elkhart Cigarette Outlet. This time though, the two white males got bold and entered with a hatchet while the female stood on look-out.

"In five hours they robbed both tobacco stores. They waited for police to leave. The police left over there at 5 o'clock and they hit us at 6:50 p.m.," said Rebecca Shay, employee, Low Bob's.

Shay thinks all the crime down this stretch is to due to a recent lack of police presence ever since arsonists burned down the bar "My Dad's Place" down the street.

"Houses being broken into, the bar burning down, the gas station owner getting jumped outside his own gas station and these robberies--and it's two white males," said Shay.

Anyone with information about the robberies should immediately contact the Elkhart County Sheriff's Department.