Police searching for an early morning shooter in South Bend 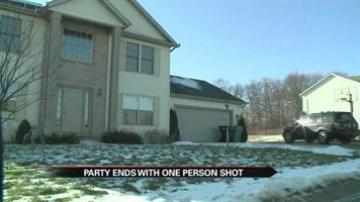 SOUTH BEND, Ind.-- Police are asking for information regarding an early morning shooting in the Nature's Gate subdivision.

A 20-year-old South Bend man was taken to Memorial Hospital with gunshot wounds to his leg.

The victim was allegedly shot at a house party.

Police said the homeowner and victim were uncooperative.

Frank Anderson said, “Being an ex-police officer I knew right away that they were gunshots and then I heard people yelling.”

Anderson is a retired St. Joseph County Police Officer. He said he never expected a shooting to happen in his back yard.

“I heard gunshots. I looked out my front door, and I saw people running through my yard, the neighbor's yard and I saw cars running up and down the street,” Anderson said. “I’ve never been in a situation where it was right at home. Otherwise it’s not unusual to hear of gunshots, shootings, and things of that nature.”

Another couple who lives nearby said nothing like this has ever happened in their quiet neighborhood.

Philip Kingery said, “Anything’s a shock when it’s so close to home.”

Christine Kingery and her husband have lived in the Nature’s Gate subdivision since 2005. She says she’s not afraid because several police officers live nearby.

Although neighbors feel relatively safe, detectives with the St. Joseph County Police said no one is in custody.

Anderson said, “People should come forward and tell what happened. This is a shock to our little community here.”

Anyone with tips on this shooting can call Crime Stoppers or the St. Joseph County Police Department.