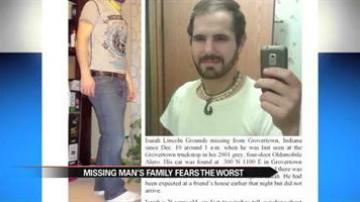 GROVERTOWN, Ind.-- Police are searching for a man in Starke County who has been missing since December 10th.

Isaiah Grounds' sister, Angel Tizazu, is active military and she came home on emergency leave to try and find her brother.

Tizazu said, “Is he alive? Is he hiding? Is he missing? I don’t know. But at this point in time, we think somethings very wrong.”

Police found Grounds' car crashed into a fence on 300 North in Grovertown.

They said blood was all over the car, but Grounds was nowhere in sight.

Kenny Pfost, the Chief Detective of the Starke County Sheriff's Department says this case is one of his top priorities.

He said two guys were with Grounds when he crashed, they left, and they believe someone came to pick him up.

Tizazu says her brother wouldn't leave without telling someone, and she believes he could be in danger.

Tizazu said, “There’s no way that my brother would just up and leave. He’s obligated to take care of my mom.”

Grounds is his mother's caretaker and his family fears he may be dead.

Investigators don't believe he is in danger, nor that foul play is a factor.

If you have seen Isaiah Grounds or know of his whereabouts call the Starke County Sheriff's Department.