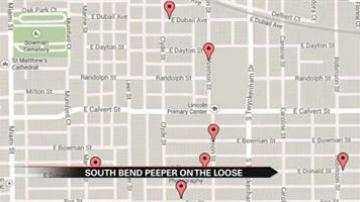 SOUTH BEND, Ind. -- South Bend Police are on the lookout for a man they say has been exposing himself to women on the southeast side of South Bend. They say he is targeting women who live alone.

Nancy Barkdull says she is one of the Peeping Tom's victims.

Earlier this week, she heard a knock on her door. When she opened it, she saw the man standing on her doorstep, exposing himself to her.

"Clearly he had been intentionally hiding and waiting for me to come home," says Barkdull.

Patrols have been stepped up in the neighborhood because officers say the suspect doesn't travel far from his comfort zone.

Detectives say the man has a pattern.

He creeps up onto people's properties, he lingers, and he looks in.

That's how police say he finds his victims, by looking through their windows.

Anyone with information, or who sees suspicious activity, is asked to contact the South Bend Police Department.