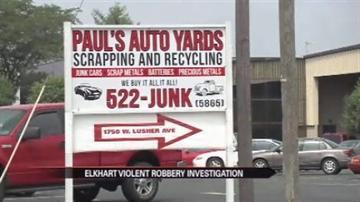 Elkhart Police are looking for two robbery suspects who were dressed in capes and masks when they robbed and assaulted the manager of Paul’s Scrap Tuesday morning.

The robbery happened at Paul’s Scrap on Lusher Avenue in the alleyway of the business while the manager was attempting to open the gate.

"I was just sitting at my desk working when I looked out my window and saw, I'd say almost 30 year old white males running across the street with black capes on and one taking a black mask off of his face,” said Showalter.

Showalter says the two men were carrying a black briefcase as they jumped into a gray SUV and sped off.

"I jumped up out of my seat and dialed 9-1-1 and went outside the building to see where they went,” said Showalter.

It wasn't until Showalter got outside that he realized what the men had done.

According to employees and the owner of Paul’s Scrap, a manager of the facility was trying to open the gate when he was attacked by the two disguised men.

"He came walking out a few minutes later and he was beat up pretty bad. His face was bruised and cut pretty bad,” said

Police would not confirm the identity or condition of the victim.

The owner of Paul’s Scrap says the yard does have security measures in place, but their security doesn’t extend to the alleyway where the manager was attacked.