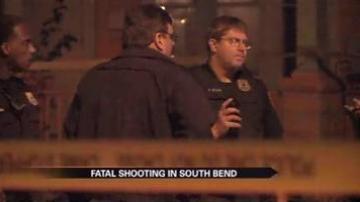 SOUTH BEND, Ind -- Police are still on the lookout for two men they think is responsible for a homicide in South Bend.

Emergency responders made their way to the 1000 block of Bowman street just after six Friday evening after learning a man had been fatally shot in the face.

It happened near Riley High School on the city's southeast side.

When ABC57 arrived on scene, one person was being loaded into the back of a police car, but we don't know that person's involvement yet.

Neighbors said it has been a while since any sort of violence has been reported on this side of town.