Police shoot and kill dog that scared nearby residents 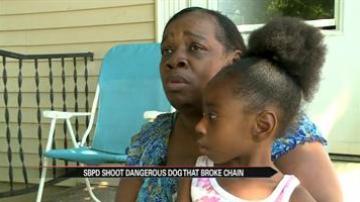 SOUTH BEND, Ind. -- A South Bend family says they were forced to stay inside their minivan because of a vicious dog. When police arrived, they shot the dog because it was aggressive.

The incident happened on Bergan Street in South Bend on Thursday, just a few feet from an elementary school.

"It was just something unexpected to happen that day. Nobody expected that to happen," said Delvon Bishop.

It happened just after dinner. The dog was running loose and trapped Yvette Jones' family.

"It wasn't no friendly dog wanting to play, he was just charging at people, growling like if I'm going to get a hold of you I will chew you up," said Jones.

Jones says she returned home in their SUV filled with her children and grandbabies, but she quickly regretted getting out of the car.

"When I was in the middle of the yard, this big brown dog just came charging so I ran up on the step and the guy that I was with ran behind me and grabbed the lawn chair," said Jones.

Jones says the dog bolted towards another neighbor crossing the street, giving her a chance to dial 911.

"When the police man was trying to calm the dog down, the neighbor was giving the dog cheese, but when the man ran out of cheese- the dog just went berserk--crazy," said Jones.

South bend police say when the officer attempted to get the dog to calm down away from the kids, the dog turned on him.

That's when the back-up police officer shot and killed the dog.

"I was just happy the kids weren't out here because they're always out here running around and that dog was loose and it was vicious," said D'Ante Bishop.

D'Ante says he stayed in the car with the little ones until the ordeal was over.

"They should of had a gate up or something. They had it on a little chain and it always got loose like that's not the first time that dog got loose," said D'Ante.

Animal Care and Control arrived just after police put the dog down.

Animal Care and Control says this can happen to any dog, no matter the breed.

We spoke with the owner of the dog and the owner admits the dog was loose off its chain, but didn't understand why police had to kill their 2-year-old dog instead of using a taser or pepper spray.