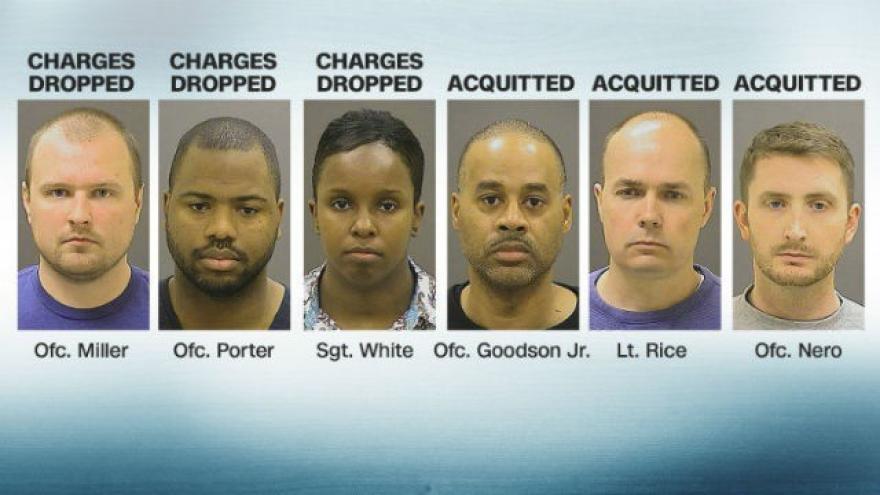 An image of Baltimore officers who have been acquitted or had charges dropped against they were originally charged for the death of Freddie Gray. Photo courtesy CNN

In recent years, fatal shootings of unarmed black men across the United States have sparked outrage and concerns over police use of lethal force. Despite several high-profile cases and increased video evidence, convictions have been rare.

One researcher reported that there are about 1,000 police shootings each year in the United States.

Between 2005 and April 2017, 80 officers have been arrested on murder or manslaughter charges for on-duty shootings. During that 12-year span, 35% were convicted, while the rest were pending or not convicted, according to work by Philip Stinson, an associate professor of criminal justice at Bowling Green State University in Ohio.

Here's a look at some recent police shooting cases involving African-American victims and the outcomes:

The 23-year old man was shot after a brief chase by then-Milwaukee officer Dominique Heaggan-Brown in August 2016. The shooting after a traffic stop sparked days of unrest in Milwaukee.

The 32-year-old Minnesota man was fatally shot during a traffic stop by police officer, Jeronimo Yanez in July 2016. Castile's girlfriend, Diamond Reynolds, live-streamed the aftermath of the confrontation and said Castile was reaching for his identification when he was shot.

Outcome: Jury found Yanez not guilty of second-degree manslaughter in the shooting death of Castile.

The 40-year-old man was shot by Tulsa Police Officer Betty Shelby after Crutcher's SUV was found stalled in the middle of the street. Shelby testified that she opened fire because she feared for her life. Videos of the shooting showed Crutcher walking on the road with his arms in the air before being shot.

Outcome: Jury found Shelby not guilty of felony manslaughter in May 2017.

The 25-year-old man was arrested by Baltimore Police after he was found with a knife in his pocket in April 2015. Gray died after suffering a neck injury while in police custody. A Baltimore grand jury indicted six police officers on a range of charges from involuntary manslaughter to reckless endangerment.

Outcome: Three were found not guilty, three officers had their charges dropped.

The 43-year-old who was pulled over for a missing front license plate was shot in the head in a July 2015 incident captured on body camera video. The officer, Ray Tensing was charged on murder and voluntary manslaughter charges. Tensing testified that he was being dragged by the left arm when he reached up and shot DuBose, while prosecutors said he wasn't being pulled by the car and didn't need to fire at DuBose.

The 50-year-old man driving with a broken brake light ws shot while running away from North Charleston police officer, Michael Slager. Slager was charged with first-degree murder after a cellphone video of the April 2015 incident was released.

Outcome: Mistrial declared in 2016. Slager pleaded guilty to a federal charge of using excessive force, and had state murder charges dismissed as part of the plea deal.

The 28-year-old man was fatally shot in a New York housing project. Police officer Peter Liang, who had been on the job 18 months, was on patrol in the dark stairwell of a Brooklyn housing project in November 2014 when he fired his gun. He testified that it was an accidental discharge. The bullet ricocheted off a wall and struck Gurley in the chest.

Outcome: Liang found guilty of manslaughter and official misconduct. Supporters said that Liang, a Chinese-American, was singled out for prosecution.

The 44-year-old man was shot in Tulsa, Oklahoma, by Robert Bates, a volunteer reserve sheriff deputy for the county sheriff's office in April 2015. Officers were conducting a sting operation to try to catch Harris illegally selling a gun and had pursed, then tackled him when Bates fired his pistol into Harris' back. Bates, 74, said he had meant to use his Taser, not his revolver.

The 43-year-old man died after being tackled to the ground and being held in a chokehold by New York City police officers for allegedly selling cigarettes illegally. Garner, who has asthma, said, "I can't breathe," as the incident was captured on cellphone video and died later that day on July 17, 2014.

The unarmed 18-year-old is fatally shot after a struggle with a police officer in Ferguson, Missouri, on August 9, 2014. Documents show that Officer Darren Wilson fired his gun 12 times.

The 12-year-old Cleveland teenager was shot by a police officer, who was responding to a 911 call claiming a person was pointing "a pistol" at people. An officer in training, Timothy Loehmann shot at Rice, who was carrying an air pistol, within moments of arriving at the scene in November 2014.

The 28-year-old woman was found dead in her cell three days after being arrested in Waller County, Texas, for allegedly failing to use her turn signal in July 2015.

Outcome: Grand jury decided not to indict any of the county jail employees.

The 37-year-old Louisiana man was fatally shot after being pinned to the ground by officers outside a Baton Rouge convenience store in July 2016. Police said he was reaching for a gun.

Outcome: No federal civil rights charges against the officers, but state charges are possible.

Cases that have yet to go trial

The 17-year-old Chicago teenager died after being shot by a police officer 16 times in October 2014. Dashcam video of the shooting contradicted nearly everything police said happened the night he died in October. It showed McDonald walking away from police as he held a 4-inch knife, not lunging toward officers, as police had said. The officer Jason Van Dyke was charged with first-degree murder and earlier this year, indicted on 16 additional counts of aggravated battery with a firearm. He has pleaded not guilty.

The 15-year-old teenager was fatally shot by a Texas police officer as he was riding in a car while leaving a house party on April 29. Police in Balch Springs said the officer fired into a car as it was driving away from a party, killing Jordan, an unarmed black teenager in the front passenger seat. That officer, Roy Oliver, was fired on May 2 and prosecutors charged him with first degree murder three days later. He turned himself in and remains free on bond.