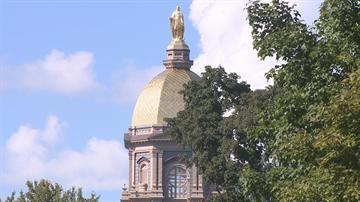 SOUTH BEND, Ind. -- There is a new operation placing police in plain clothes on the streets near the University of Notre Dame after four students were mugged over the weekend.

On Sunday, four different college students were robbed at gunpoint. Now, those students have to get ready for the first day of classes Tuesday with that on their minds. Police said it is during these first couple of months of school that they see a spike in armed robberies, which is why police started an undercover operation.

Notre Dame campus is buzzing with life as students prepare for the first day of classes come Tuesday. As part of the excitement, over the weekend students started moving in. "Pretty much just got done unpacking and fixing up the house a little bit. So, now we are fully moved in," said Conner Ryan, a senior finance major at Notre Dame.

Ryan's roommate, J.P. Sullivan, said moving off campus is an exciting way to start their senior year, "I was really exited to go off campus because I wanted the extra responsibility".

However, Lt. Dan Skibins with the South Bend Street Crimes Unit said with the extra responsibility comes safety concerns too. "With students being back in town and students that live off of campus there is more potential for robberies to persons".

Skibins said that because of an annual spike in armed robberies and muggings around this time of year, police are increasing patrols in the areas where most of these crimes are happening, including the neighborhoods around Notre Dame's campus.

"The other police strategy we are implementing is getting plain clothes officers walking around so hopefully we can spot some suspicious activity before a crime to person takes place," said Skibins.

Police said the most recent armed robberies sparked the decision. A Notre Dame student was robbed at gunpoint as she got out of her car with her dog after arriving home. The man that approached the young woman startled her and caused her to drop the dog leash. As the man demand she hand over everything she had, he threatened to shot her dog if she get control of her dog.

At the exact same time, just across campus, three other college students were also being robbed at gunpoint as they walked down Notre Dame Avenue. That man threatened to shoot the three young woman if they did give him all their money. Notre Dame students new to the block said the news was shocking. "I was actually a little surprised because of how close it was to us," said Sullivan.

Now, Sullivan and his roommates say all they can do is stay alert and keep safety in the back of their minds. "I think we are pretty careful already. We have a working alarm, we lock all the doors and have flood lights on every night," said Ryan.

As part of Notre Dame's student orientations over the weekend, students were educated on the dangers of armed robberies around campus and are encouraged to take extra precautions to stay safe.