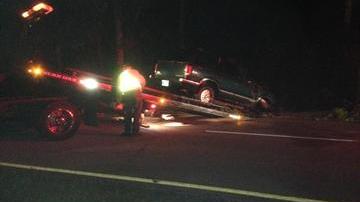 ELKHART COUNTY, Ind. — Police used a woman's cell phone to track her location after she'd been involved in a car accident Thursday afternoon.

Ray Storer contacted the Indiana State Police just after 11 p.m. Thursday night explaining that his wife, Loreena Storer, had not reported for work.

He said he last saw her when he left for work early Thursday morning.

Using Loreena's cell phone, police were able to find her crashed Chevy Trailblazer off of the John Weaver Parkway in Elkhart.

"Thankfully she had a cell phone and the cell was on and we were able to use the cell to at least track down her location," said John Dupont of the Indiana State Police.

Police say they believe she'd been trapped for more than 12 hours.

"We're lucky to be able to find her. The fact she was awake and able to talk to us. She was hidden very well in the wood line. You could not see her from the road," said Dupont.

They say when they found Loreena she was talking but a "little bit out of it."

She also had cuts on her body and face from the accident.

Loreena was taken to Elkhart General Hospital for cuts and trauma to her head and face.

Police located her cell phone in her pocket and say they believe she was unable to use it because of her injuries.