Police warn of the dangers of "meth trash" 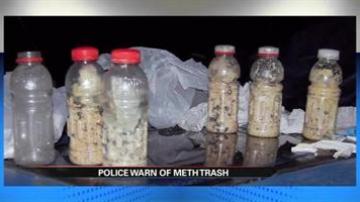 KOSCIUSKO COUNTY, Ind. -- Now that the snow has melted and people are getting out and about to enjoy the nice weather, people are coming across "meth trash." Police say they often find the meth trash on the side of the road, in city trash cans or down sewers. What should you do if you find meth trash?

Police say there are ways you can tell the trash is meth related.

"There's actually an exit port or a tube that's stuck on the outside of like a 1 liter or a 24 ounce bottle of pop," said Sergeant Chad Hill of the Kosciusko County Sheriff's Department.

If you look closely you can see crystallized residue inside. Police call it a one pot meth lab.

If you think it could be "meth trash" stay far away.

"It's a possibility that it could be explosive. There's a lot of hazardous material that's in there. A lot of acidity that's in there because of the chemicals that are involved," said Hill.

How often is meth trash reported?

"We hear it about, at least once a week. Sometimes more than that, that we actually get called in about particular trash and our officers will go investigate to see if it is just trash or if it's a meth lab that's been tossed out," said Hill.

If you see something that looks like a mobile meth lab or meth making trash, call the Indiana State Police and give them the location.

They will send someone out and properly dispose of the hazardous materials.