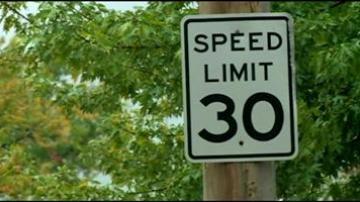 MISHAWAKA, Ind. -- Mishawaka Police want drivers to watch their speeds in residential neighborhoods. One resident on Dragoon Trail says he has seen way too many accidents in his front yard.

Every day for the past seven years, Brandon Ferguson watches drivers ignore the speed limit sign in his neighborhood on Dragoon Trail.

"It says 30 which nobody ever does, unless you're driving on the road, then you find the guy who's going 30," said Ferguson.

Rear end collisions, telephone pole collisions and cars flipping over are just a few of the accidents that have happened in his front yard.

"It's only a matter of time before someone comes right through our living room," said Ferguson.

"I write tickets on Dragoon Trail almost every other day," said Lieutenant Tim Williams of the Mishawaka Police Department.

He says ten of the 18 fatal accidents last year were caused by speeding.

He's baffled by the numbers of people speeding through school zones like the one outside john j. Young middle school.

He says he'll sit in the left turn lane, but that still doesn't stop the speeding.

"It's 30 miles an hour during the day time and so when people see 4 lanes they think oh well I should at least go 40-45 miles an hour and that's what the speed limit should be. Well that's not the case," said Williams.

But patrol officers are still expected pull speeders over.

"We've got radar units in a lot of the squad cars and the officers that have the radar units have them because they want them to do traffic enforcement," said Captain Phil Trent of the South Bend Police Department.

Enforcement that Ferguson wants to see more of after one too many close calls.

"A guy blacked out and just made it between that pole and that tree. Didn't hit any of our landscaping or anything just luckily didn't crash into anything,' said Ferguson.

Police say no matter where you live, if you feel that speeding is an issue in your neighborhood just call up police and complain. They will investigate the issue and possibly increase presence in the area to deter speeders