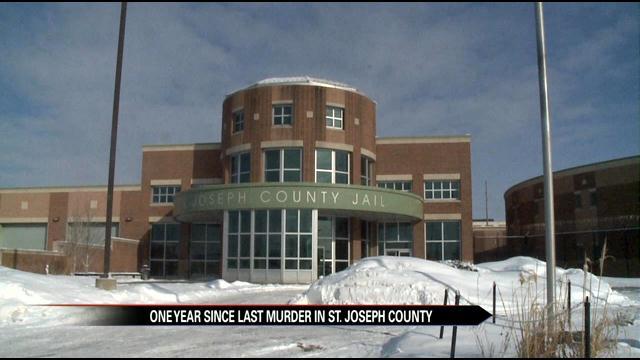 It has been more than one year since St. Joseph County Police have responded to a murder in their service area.

The last homicide reported in the county was on February 18th of 2014.

In the last year they have not responded to a single murder.

“There are a few things that I think play into that. One of them is that the state of emergency medical care is very, very good. Which means that the difference between a shooting investigation and a homicide investigation is sometimes that good EMS, that good hospital medical care that we have in this community,” said St. Joseph County Sheriff's Department Assistant Chief Bill Thompson

“The combination of good medical care, and the fact that if you do commit a homicide in this community, there's a pretty good chance you'll get caught for it; I think those things help,” he said.

The last homicide logged on the St. Joseph County Sheriff's Department website was on February 18th of 2014.

Until this year the county averaged four homicides per year since 2009.

With 14 patrol cars out on the street at any given time, Thompson says the department is working hard to keep murders down.

“The sheriff has done some pretty good work in getting more patrol officers out on the street. And I think there's a number of different crimes where that is making a difference,” said Thompson.

Thompson said it isn't uncommon for the county to go long periods of time without any murders.

He said the numbers go up and down. In 2014, one homicide was reported. As many as six murders were reported a few years earlier in 2011.